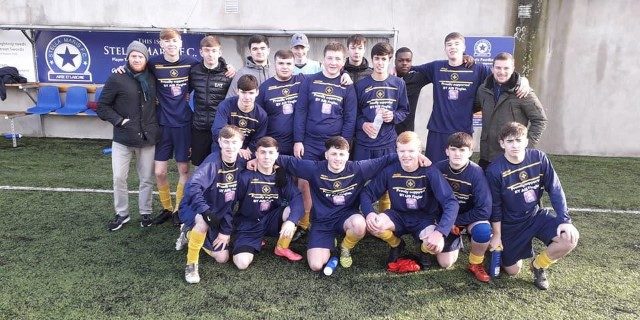 Our U19 Boys Football Squad recently won the North Dublin Championship, emerging victorious against a strong St. Joseph’s side. New Cross dominated most of the proceedings, however a couple of lapses in concentration combined with some quick counter-attacking from Joey’s had New Cross behind on two separate occasions. From 1-0 down, New Cross equalised after some fantastic build-up play. No doubt Shane Farrell will try to claim the goal, but sorry Shane, it was an ‘own goal’…! From 2-1 down Dean Ivory equalised
with a fantastic header, getting on the end of an exquisite long ball from Leon O’ Brien who was as reliable as ever in defence. With the momentum swinging New Cross’ way, a 3-2 lead was taken when Shane Farrell slotted home from an incredible through-ball from ‘man-of- the-match’ Cian Malone. Cian’s ability to split defences with such deliberately angled and precise passes is apparently a result of his indepth knowledge of ‘Pythagoras’. Following this game he expressed his gratitute to his Maths teacher Ms. Okojie. Congratulations to Mr. Guilfoyle, Mr. White and to all players on a job well done, and thank you to the many students who went to support the lads. And of course, the very best of luck in the ‘All Dublin Championship’. 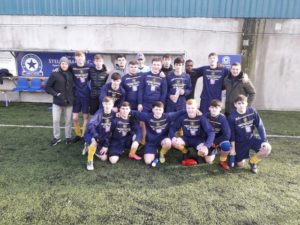