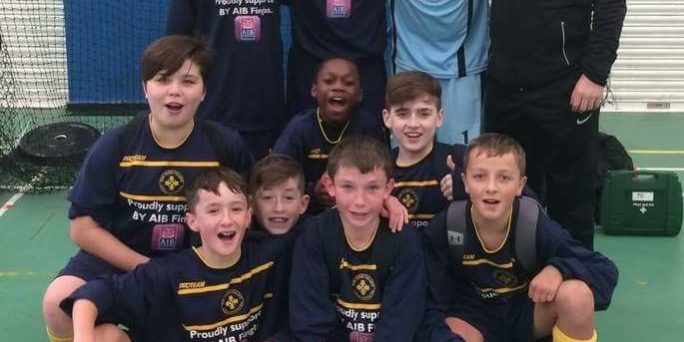 Solomon ‘The Sniper’ Olagoke, David ‘Mr. Reliable’ Roche, Aaron ‘The Rock’ Graham, Dean ‘The Engine’ Morley, Sheriff ‘The Ninja’ Kuti, Niall  ‘The Pocket Rocket’ Vance, Michael ‘The Motivator’ Stokes, Seán ‘Mr. Calm’ Ward, Declan ‘The Defender Destroyer’ O’ Brien and Josh ‘Road Runner’ Morris. These are the students who last week made history by becoming the first New Cross Futsal Team to qualify for the All-Dublin Futsal Finals. Awaiting this very talented team is a day out at the National Sports Campus in Abbotstown. The boys will test their abilities against some of the best teams and players in Dublin, and it’s a challenge that all players are really looking forward to. The journey to the All-Dublin Finals began at the end of August when the ‘After-School Football Programme’ began. The squad was well prepared for the second part of the Futsal journey: the qualification tournament at Trinity Comprehensive in Ballymun. New Cross performed brilliantly against their opponents, ending up in a very tense play-off against a talented Trinity Comprehensive team. New Cross kept their cool under pressure, created lots of goal chances, communicated well and worked efficiently as a team to win 3-0 and deservedly book their place in the All-Dublin Finals. No doubt the team will perform with the very same determination and work ethic next month. 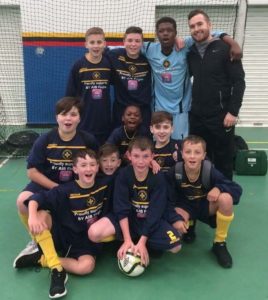 New Cross College’s Futsal captain Dean Morley is looking forward to the opportunity of showcasing his team’s talent at the All-Dublin Futsal Finals on November 8th at the National Sports Campus in Abbotstown. However, he’s adamant that his team have yet to show their full potential; ; “We have much more to give”, stated Morley when reflecting on the qualification round in Ballymun. “We played really well during most games, but we did lose concentration in some matches. We need to work on this for the finals as the standard of the teams will be much higher”. With only two after-school training sessions left before the All-Dublin Finals, New Cross certainly have a big challenge ahead of them to prepare for
the tournament. But according to Morley and his team mates, it’s a challenge that all players are really looking forward to.